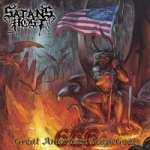 For those unaware of this act’s past, SATAN’S HOST was a Power Metal unit in the early to late ’80s, that had a debut album entitled “Metal From Hell” released in ’86 on a relative unknown independent label, and naturally shared the same fate that the majority of bands who make this same mistake suffer. No one ever hears about them until years after the fact! And then like mushrooms after a good rain, there are mysteriously hordes of fans who say they’ve been their biggest fans since day one. In this case, you would even be hard pressed to locate anyone in particular out there who’d bother to admit to this untruth or go running to fetch this album from their collection. Not that SATAN’S HOST ate shit in the day they most certainly did not. They did however suffer from a terrible engineer and popularity speaking, were just about as unknown to the outside world as one could possible get. SATAN’S HOST never benefited from a proper recording nor proper distribution / promotion or anything else outside of the actual studio time being paid for and of course a limited debut album run. This LP, as I am sure you have guessed, was subsequently bootlegged later over the years and actually for a good reason. The imagery, the songs, the vocals(!) – the actual character of this band – provided by JAG PANZER front man, Harry Conklin, was nothing short of monumental for its time. And for the sole fact as well, that logically speaking (and in my opinion) SATAN’S HOST was the next jump off point, the next step up the latter of evolution so-to-speak, in regards to the traditional fodder of that period of U.S Power Metal… The sword and sorcery mystique that had swept up this genre’s scene since ’77. SATAN’S HOST could be in other words, the “missing link” bridging the gap between MAIDEN / the NWOBHM in general / DIO and say / MERCYFUL FATE / METALLICA and SLAYER. Crude as this might appear on paper, the relevance of this particular record “Metal From Hell” and this band, SATAN’S HOST, and their contribution to the U.S. scene will always go sadly little noticed yet to those that have heard this album, those few shall of course hold the old SATAN’S HOST in absolute reverence. However, before us today lies not this album but one made twenty-two years after the fact. Obviously there’s going to be some changes, and I am not just talking about the apparent personnel either. No this version of SATAN’S HOST, who I might add re-united and reformed HOST in the late ’90s, have left what those before them were forging back then, back in the past, and now can only considered a poor man’s version of the latest flashes-in-the-pan of Black Metal. The “Great American Scapegoat 666 “, aside from one of the worst titles to be given a supposed Satanic Metal album (all I can think of is freaking Rob Zombie when I read this album’s name!), is about as pointless an offering in today’s Metal world as say Web Records attempt at distribution, of SATAN’S HOST’s debut album. Seriously, the poor musical direction choice this band has clearly taken, and of course the velveeda cheese-ball, over-the-top, imagery throughout this CD shows them no shame, shows them no validity nor even any substantial credibility as to exactly what this act’s tenure within the scene ought to have forged them by now. There’s no spirit here. Not even in the somewhat feeble attempts to grasp onto the more HM / Thrash roots of their yesteryear, hence the lead breaks in the title track, as well as ‘Pyromancy, The Art of Fire’, ‘Xeper 22’ and of course the lead break initiate of ‘7 Strings’. Other then these faulty footholds, not even the lyrics nor the layout, nor the actual logo on the record jacket would ever grant you instantaneous recognition that this specific disc spinning was anyone in particular, let alone SATAN’S HOST. Contact: www.myspace.com/satanshost or www.satanshost.com or www.moribundcult.com