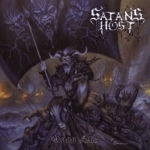 The US Satanic Heavy Metal titans SATAN’S HOST are among us again – and with their 11th full-length studio recording titled "Virgin Sails", which should surely make us feel pumped up and excited, right dear folks? SATAN’S HOST’s previous album, "By The Hands Of Devil", was throughout a superb release from these loyal disciples of Satan, so undoubtedly our sincere expectations have been running pretty darn high regarding the band’s next release, which happens to be this brand-new 10-track affair from them, "Virgin Sails". It must be said ever since Harry Conklin (aka Leviathan Thisiren) rejoined the band in 2010, it feels like a whole new era has started for SATAN’S HOST; an era in which the band seems to be on fire better and stronger than ever before. As good as "By The Hands Of Devil" was – much thanks to Harry’s very inspirational and effective vocal performance on that recording (which more than obviously also fed the band’s inner flame for a better performance material wise overall), "Virgin Sails" takes a few more extra steps forward in terms of songwriting maturity and execution of new ideas. On "Virgin Sails", SATAN’S HOST do what they can do best – and that’s to combine some certain elements seamlessly from Heavy Metal, Power Metal, Thrash Metal, Death Metal and Black Metal somewhat flawlessly yet so enjoyable way. SATAN’S HOST have that specific ability to mix different Metal genres such an extraordinary convincing and pleasing way, without sounding fake – just no matter if you would hear them for the very first time, and having no idea their whole band history at all. What "Virgin Sails" is basically all about, it’s first and foremost about top-notch musicianship, which is a result of years and years of musical experience, to believe your own work – and sheer determination to achieve some certain goals, without giving up no matter if some low points of your career may have tried to kick the shit out of you. SATAN’S HOST have surely been baptized in their own purgatory – and it really shows when listening to their latest album. It’s just full of the guys’ determination to give some extra painful kicks right back to you; an amazingly mature display of some larger than life Heavy Metal harmonies in between brutality and utterly beautiful melodies – like handing over all those most tasteful ingredients on one single plate for its listeners that we all love in Heavy Metal music in general speaking. Heavy Metal was meant to be dangerous, wicked, raising different types of emotions in a listener, making you return back to it over and over again – and everything in between really. Well, "Virgin Sails" is all about that – and much more actually, and it’s not only SATAN’S HOST’s best work to date but also one of the most convincing Metal albums recorded during this ongoing millennium. No kidding! The title track alone, may well be the band’s most breathtaking song they have ever recorded during their entire existence. If you think I am lying about this album to you, then by all means do yourself a favor by putting "Virgin Sails" on your ‘must purchase’ list next. You won’t regret it, believe me. The filthy and pitch-black nest of Satan can be found at: www.satanshost.com, label: www.moribundcult.com