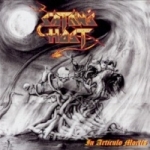 I need to give you some introductory explanations concerning this review. Less than one month ago, a friend of mine mentioned to me that SATAN’S HOST, a semi legendary Heavy Metal band of the 80s, were still in activity and now playing Black Metal. I was a little sceptical at first but gave the internet a try nevertheless. To my great surprise, I found out immediately a brand new site for SATAN’S HOST, complete with recent news and more importantly a biography mentioning albums I never heard about! I have to precise to our younger readers that SATAN’S HOST were mainly known for their first album "Metal From Hell" (1985) which now is a collector on vinyl format and featured no less than Harry Conklin (JAG PANZER) on vocals (using a pseudonym though). Their sophomore effort "Midnight Wind" (1987) never saw a proper release but was abundantly bootlegged throughout the years. After that SATAN’S HOST seemed to vanish out of this world. But in fact the band remained active in the obscurest way fighting courageously against the odds (read their troubled biography on www.satanshost.com). But let’s go back to my own encounter with the new incarnation of SATAN’S HOST. To keep it short, vocalist Eli Elixir was kind enough to send me two efforts previously issued by the band, these two being reviewed here. "In Articulo Mortis" dates back as far as 1999 and features five real songs and an intro. Well, this record blew me the first time I listened to it! And it is very simple to explain why. Strictly speaking, one can’t say SATAN’S HOST play Black Metal. Indeed SATAN’S HOST now combine diverse elements coming from Death, Black, Thrash and Heavy Metal to offer a fantastic music which crushes everything on sight. SATAN’S HOST owe more to POSSESSED, INFERNAL MAJESTY and MERCYFUL FATE than anything else, certainly due to the approach of the sole remaining founding member, guitarist Patrick Evil. Patrick has kept a somewhat dated way to play his instrument, tying the band firmly in the 80s style, even if the younger members of the band have of course modernized the SATAN’S HOST sound. The result is a perfect synthesis of two conceptions of extreme Metal I don’t know the equivalent of. And if you think I am exaggerating here, just listen to the samples the band put online and I bet you will be easily convinced! You will certainly note the complexity of the song structures (hence the comparisons I made above) and the exceptional talent of all the musicians involved, especially Eli Elixir who is (to me at least) the very best vocalist presently in activity in the extreme Metal field. Without stupidly growling or shrieking, Eli belts out the Satanic lyrics he and the band relish on with an unbelievable irradiating power, like if his lungs are made of iron. While "In Articulo Mortis" is nothing more than a mini-effort in term of length, "Archidoxes Of Evil" is a full album gorged with menacing riffs, demented vocals, numerous rhythm changes, and I just wonder why this record was never properly released! Because believe me, this album is HUGE and deserves to be distributed worldwide without delay. This album tops "None Shall Defy" in quality, just listen to the track ‘Plight Of The Magus’ to receive the bloody confirmation of this. I just hope SATAN’S HOST will gain a wider exposure in a not too distant future, because they have a lot to offer. Maybe a clever record label will have enough sense to reissue "In Articulo Mortis" and "Archidoxes Of Evil" while the band announces the imminent issue of their new album. Meanwhile, I can only urge you to contact Eli at Elixir@satanshost.com to check if he can supply you with copies of the two records I discuss here. Support SATAN’S HOST with all the passion you are capable to feel, and then show that a real Metal heart is beating inside your chest!