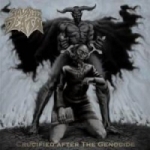 I didn’t know the Chinese label AreaDeath until I received this release, it seems like they have specialized themselves in digging up long lost and forgotten demos by underground bands around the globe, and giving them a proper release – and some of the praise and glory they never received back in their heydays. Take this band, SAVAGE DEATH for instance, hailing from New Jersey, with a history of 2 demo releases "Mass Genocide" from 1985 and "Crucified In Hell" from 1986 and that was it, never again should the world hear about the band’s efforts, if it weren’t from AreaDeath. But again, how important could a short lived band from New Jersey be? Could they have an impact on the Metal scene as it is today, or even on the Metal scene back then? When giving the material on this release a fair amount of spins, hell yeah, this was a band ahead of their time – and a band that would have made a serious impact in history, if they ever had recorded an album and had been given serious distribution – they had it all! The dark and raw relentless Thrashing madness as POSSESSED, DARK ANGEL AND SLAYER was delivering at the time, the insane and barrier-breaking guitarplay as Chuck Schuldiner and MANTAS / DEATH had as their trademark – and when speaking of MANTAS / DEATH it is quite funny to see the 2 bands sharing a couple of songtitles in ‘Evil Dead’ and ‘Legions Of Doom’ (well, almost… the MANTAS tune was entitled ‘Legion Of Doom’ – Frank) . On top of that, SAVAGE DEATH had the darkness and eerie touch in some of their songs as NECROPHAGIA had as their trademark – If the band had carried on, they would have been equal with those bands, there can’t be much doubt about that. The highlight of the demos are without a doubt the guitars, catchy riffing with a heavy and ripping base in Thrash with darker threads into what would become Death Metal with time – on top of that some wicked melodic riffs and insane noisy leads and classic Heavy Metal sounding solos. The play is very varied and insanely catchy and recognizable. The man behind, Tom Stevens, later on carried on in the rather good Death Metal band MORPHEUS DESCENDS and now NOKTURNEL, where he continues his unique approach on the guitar – and I also think he is the only one who continued on the Metal path after SAVAGE DEATH disbanded. Though not only the guitars are attractive on the demos – the vocals are classy as well, a dark screamed grunt as a base, not far from what Jeff Becerra pulled off in POSSESSED, mixed with insane screams in the same vein that Don Doty delivered in DARK ANGEL – a perfect mix that fits the music perfectly. The rhythm section is tight and pulling their part of the train, with some great drumming popping out here and there, Dave Marks know how to handle his cymbals and on/off march patterns. On top of the 2 demos we get a live set consisting of 7 tunes of thrashing madness with a decent sound, and what seems to be a band and crowd on fire – quite great to hear SAVAGE DEATH tear their songs out in the open live. 2 demos and a live set, what more can you ask for? SAVAGE DEATH’s complete history on CD – and an experience and lesson in Thrash and early Death Metal – the effort and passion for the music reek from the speakers and the atmosphere immediately catches on – this is what Metal is all about! http://adp.areadeath.net