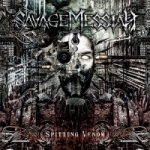 Fantastic mid-’80s Bay Area styled Thrash Metal that – had this band been around and put this EP out in 1987 instead of 2007 – no doubt Megaforce or Roadrunner Records would have absolutely picked them up! Imagine a catchier / more aggressive HEATHEN with LÄÄZ ROCKIT lead guitar work and the aural attitude of "New Order " TESTAMENT. Sounds like your type of Metal, fuckin’ A! Mine too! Vocals are of course naturally clear sung (and what a nice change of pace from the screamers I have had the displeasure of listening to lately!) reminiscent of a cross between Ben Gaither of the ages-now defunct East Coast Thrashers SILENCE (the bulk of the vocals presented here on this CD) and Matt Ulricksen of the Castro Valley, California Metallers MILITIA (www.myspace.com/militia89 – check out ‘Fiend Of Misery’ and ‘The Awakening’). No better reference point of this comparison to Ulricksen is to be heard than when SAVAGE MESSIAH slows down to show you the more melodic edge of their material, most apparent on the band’s sixth track ‘Conspiracy Of Silence’. Production on this 8 song EP is solid, punchy, with a high emphasis on clarity and a supine even mix. Lyrical matter runs the measure of intellect and interest and the words fit each of the songs like a glove. With the debut CD of fellow countrymen – Huddersfield’s EVILE "Enter The Grave" on Earache Records, I can’t help but think SAVAGE MESSIAH are the next in line to have a chance at major record label success, as to these ears SAVAGE MESSIAH are all over EVILE like a bad habit! Not only this but I can totally see where SAVAGE, in time, will re-establish once again the English Thrash flag once carried by their forebears ONSLAUGHT, ANIHILATED, DEATHWISH / HYDRA VEIN, D.A.M., ACID REIGN, SABBAT, RE-ANIMATOR and XENTRIX. Buy or Die! Contact: www.myspace.com/savagemessiahmetal or davidsilver7@msn.com