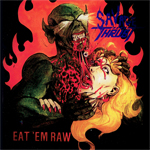 New York City based SAVAGE THRUST just released one album, namely "Eat ‘Em Raw" back in 1990. Since no label was willing to take care of the band’s work (two demos and one single at that time) the guys decided to publish the album on their own and ended up selling 5.000 cassettes of "Eat ‘Em Raw". Accordingly they sent 2.000 items to media worldwide. But still after this success no label was interested, so after two further demo tapes the band split-up and besides two reunion shows in 2001 SAVAGE THRUST disappeared from the scene. Thankfully Reborn Records remastered this little gem, an iconic piece of East Coat Thrash Metal. Starting with the artwork, song-titles likes ‘Acid Bath’ or ‘Speed Or Bleed’ and, of course the music itself, this album gives you a valuable insight of the Thrash / Speed Metal scene in New York back in the second half of the 1980s. Ferocious drums plus razor-sharp riffs plus a little slice of melody plus aggressive screaming vocals. More ANTHRAX than METALLICA. When it comes to this style of music the vocalist is always the crucial point. If he sounds too much like a castrato or tortured cat it is, at least for me, almost impossible to enjoy the music. And back in the past there have been plenty of Speed / Power / Thrash albums which I could not enjoy due to high-pitched screams. In this case Rob Antilla is close to my personal threshold of pain, bit close to the bone, but I still like this album. Seven songs of well-crafted Thrash Metal, a fine remastered sound – nothing to criticize from my side! If you like this style – buy this album and give the band the acknowledgment they did not received 25 years ago. www.savagethrust.com, www.facebook.com/savagethrust, rebornrcds@gmail.com