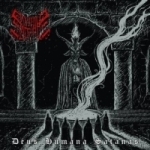 SAWHILL SACRIFICE, this savage 5-headed Finnish incarnation of all evil, started out as a Death / Thrash Metal act but little by little adopted a darker and more grim sound for their musical path. "Deus Humana Satanas", SAWHILL SACRIFICE’s debut album, makes that path even darker and blacker for them, employing the entire extreme Metal field for their best purpose possible, in which there’s no space for weak-minded losers and sacrifices must be done in the name of Satan. Well, I don’t know much about that crazy shit but it still must be said that SAWHILL SACRIFICE may well offer a few precious moments for the fans of blasting and intense Black Metal, especially if you are a fan of the ineffable Swedish kings of darkness, DARK FUNERAL. SAWHILL SACRIFICE have much of the same frantic and apocalyptic atmosphere in their sound, let’s say, that’s constantly present in DARK FUNERAL’s sound. However, the Finns in very question are definitely not any straight copycats of DARK FUNERAL but rather operate deep in the murky waters of their own musical home territory, in which the band’s past roots haven’t completely been forgotten either. A plateful of dangerous and disturbing sounding Black Metal this is – and it’s momentarily damn enjoyable even. Don’t break your leg for this though if you cannot purchase the record right away. More about these vile Finnish Blacksters at: www.sawhillsacrifice.com, www.violentjourneyrecords.com