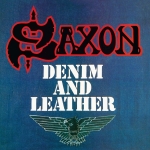 Well, what can one say when reviewing such a classic album? A pillar of metallicness that every Metalhead should be well acquainted with? This is the fourth album by SAXON, released in 1981, the last one of what is regarded as their three truly essential early eighties albums, and the last with the whole classic core, as their drummer Pete Gill (later and shortly of MOTÖRHEAD fame) left after this one. Some people see this album as the first one where SAXON’s youthful outbursts started becoming more calculated, the beginning of a more mature and commercial approach that would amount to a later downgrading in relation to their amazing first few albums. Truth is that, by any account, there was much prime quality material waiting in the future of SAXON to be released (as well as extremely cheesy radio rock and derivatives); still, they would not often reach these heights, the heights of these formative years of one of the greatest bands of the NWOBHM. The whole of the album is grandiose and it includes two of the most acclaimed songs of the band, ‘Princess Of The Night’ and ‘And The Bands Played On’ (the latter about the 1980 Monsters Of Rock festival). As well as, of course, the title track ‘Denim And Leather’, an anthem about the early days of Heavy Metal that is sure to get the blood pumping for anyone to whom this music has been a lifestyle for decades. SAXON were playing varied music by this time, from slow to speedier tracks, a lot of influence from the best that seventies’ Hard Rock had to offer as well as a lot of heavier, ballsy music. Always with great amounts of musical proficiency and taste (listen to that long beautiful solo in ‘Midnight Rider’ among so many other fantastic moments). This remastered version includes a lot of goodies, since it brings no less than nine bonus tracks, namely a remix of ‘20,000 Ft.’ (another super classic from "Strong Arm Of The Law") and a bunch of live songs, nearly all of which from their 1981 tour, that let you into a bit of the feeling of what it must have been like to see SAXON on stage at that time – and with fine recording quality considering its age. The intro alone before ‘And The Bands Played On’ is enough to stir up the feelings in your Metallic soul! Bottom line, if you like Heavy Metal, this is truly an essential album. So if you need some action and nothing comes around, don’t call the doctor, turn up the sound, play it loud! And go to www.saxon747.com, www.facebook.com/saxon, www.bmg.com