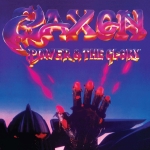 ‘The Eagle Has Landed’, ‘Power And The Glory’, ‘Warrior’, ‘Midas Touch’, ‘Redline’ and my Heavy Stadium Rock Speed Metal favorite of this album ‘This Town Rocks’, are all tracks roaming this ’83 album from SAXON, one of the older albums that don’t get that much praise, which I partly don’t understand. Well, the album is built on the same recipe as the previous releases, and perhaps it seems a tad more rehashed, as SAXON wasn’t the talk of the town or the new band anymore in ’83, with four albums behind them already, though it still kicks solid ass in my opinion. It is all classic SAXON, solid written songs with great hooks, good melodies, catchy main riffs, solid rhythm patters, good solos and of course the great vocals of Biff Byford, and solid lyrics, which all have choruses easy to remember and sing along to. Classic NWOBHM with a good deal of Boogie Rock to it, just like SAXON made us like it! And, being a part of the BMG re-release series of the good old SAXON classics, we also have a great deal of bonus material on this baby. We get two tracks from a session with the producer of the album Jeff Glixman, and then the Kaley Studio demos from 1982, which don’t hold the same track listing as the EMI re-release of the same album from 2009, for some strange reason. Though nice additions to a good album, I mostly find old demos good fun to listen to. Another SAXON album which is hard to be without, and it lights up every collection of NWOBHM and Rock ‘n’ Roll, so turn out the lights and start to rock your town: www.saxon747.com, www.facebook.com/saxon, www.bmg.com