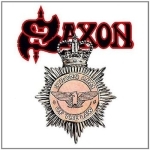 "Just before dawn in the cold light, we came out of the night, a great expectation from the man who ran the show, will it rain, will it snow, will it shine, we don’t know, are there clouds up in the sky" is the first verse from ‘And The Band Played On", from a single released not far after "Strong Arm Of The Law" SAXON’s third full length and perhaps their epic high. Again one of those SAXON albums that wins the price of their magnum opus, on that specific day, in close battle with the other five great albums from the Englishmen. The ball starts out with one of the big epic Heavy Metal hymns of all time ‘Heavy Metal Thunder’, a song that gets any Heavy Metal party going, a classic SAXON banger, and even though that song is quite amazing, the most amazing part of this album are the epic songs. A track like ‘To Hell And Back Again’ takes us to almost JUDAS PRIEST like heights, and Byford does resemble the Metal God vocally on the track. The band is also touching the subject of the assassination of John F. Kennedy, and of course no SAXON album without a track about flying. ‘20.000 Feet’ takes us above the skies, in an epic jetplane flight. I’m a fan of SAXON getting some attention with these great re-issues that BMG has going, even though it is re-issues of EMI’s version with the same bonus material and such from 2009, just with a better finish. And a band like SAXON that is a tad overlooked deserves some new ears. After 40 years of service in the name of hellish Rock’n’Roll, SAXON we salute you! "Pull your heads back, hold your hands high, shake your body, if it’s too loud, and you’re burning hot, fill your heads with Heavy Metal thunder, Heavy Metal thunder": www.saxon747.com, www.facebook.com/saxon, www.bmg.com.