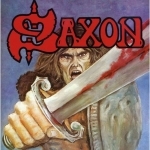 When it comes to the SAXON debut, I guess all has been said in the past already and dedicated Heavy Metal maniacs know what’s up when ‘Rainbow Theme’ starts floating out of the sound-system. We’re back in 1979 and Heavy Metal is ready to conquer the world with its long haired, denim and leather wearing, social outcast followers armed with spikes, chains and a fire burning inside that could lay galaxies to ashes. Biff and the boys deliver the soundtrack to a new way of life and what a way of life that is. About 40 years later nothing has changed and the same goes for the next 40 years. As we all know it especially is this breaking-new-ground attitude and the naivety those bands possessed that makes these records so special. With this re-release one also gets the SON OF A BITCH demo as well as some BBC and Monsters Of Rock material (which was also featured on the EMI release from 2009 for example). I personally haven’t heard this material before, but I’m glad that I did so now. The demo is absolutely brilliant with a great sound and hungry musicians wanting to take what’s theirs. The same goes for the BBC sessions, which to my ear sound absolutely astonishing. That rhythm-section is mean and the general tightness absolutely takes the music of SAXON to another level. The last three songs of the release capture SAXON kicking ass at Monsters Of Rock ’80 and give an example of how good live concerts used to sound (of course with the necessary postproduction hehe). Anyways even though this package has been released in the past and isn’t new at all, it is especially for younger people who just got into Heavy Metal a nice way to get a glimpse of how things should be done. More information about SAXON and where to catch them live can be found at www.saxon747.com, www.facebook.com/saxon, www.bmg.com.