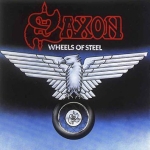 "We were strangers in the night, both on separate flights, strangers in the night, going nowhere" is the quite catchy and rocking chorus from one of the classic SAXON hymns ‘Strangers In The Night’. One of the myriad of killer tracks on "Wheels Of Steel", the second full length album from the Boogie Rocking New Wave Of British Heavy Metal legends SAXON straight outta Barnsley. This is the second remastered re-release of this exact album, the first one saw the light of day in 2009, with the same bonus tracks and all, and if there is a new mastering on this or any difference, I have a hard time to hear and figure it out, though it is great to see some of the old British heroes getting some of their legendary albums back into the spotlight (and in this case even as nice digibook editions – Frank). SAXON has always been about no-nonsense Rock’n’Roll, quite simple rhythm pattern, some great catchy riffs and hooks, and the incredible voice of Biff Byford, some of the old material could make one think of SAXON as the English version of AC/CD, as the music is as powerful and catchy, as the good old records from the Australians. I sometimes wonder why SAXON didn’t make more commercial noise back in the days, as they have a lot of what it takes. Quite accessible music (even though it is hellish energetic Rock’n’Roll), though we all loved that, during most of the 80s, they have bluesy great guitar solos (Slash did you ever take a listen or two to SAXON, when writing those good old GUNS’N’ROSES bangers?), sing along chorusses en masse, kick ass feel good Rock’n’Roll with one of the great singers, that vocal, damn… Just take a listen to the live tracks from Donnington in 1980 on this album, when Biff is on stage and his vocals hit both high and low, damn it is pure and intense, topped with emotion and delivery. This is a top five SAXON album, if not the best, the top five tier is quite close, and I guess it’ll depend on my mood which one I’ll pick as the best. On an exact day, though you can’t go wrong in town with this one, or the other four. "Wheels Of Steel" doesn’t have a weak song on it, all are quite enjoyable and rocking. On top of the album we are getting two demo rehearsal tracks, one live B-side and five tracks from the Donnington gig, a nice offering of goodness. "When my foots on the throttle there’s no looking back, I leave the motor tickin’ over when she’s back on the track, I’ve got a 68 Chevy with pipes on the side, You know she’s my idea of beauty, that’s what I drive", jump on the wheels of steel at: www.saxon747.com, www.facebook.com/saxon, www.bmg.com