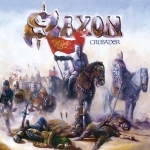 Have you ever listened to an album that is worth buying only for its cover artwork and its title track? "Crusader" by SAXON is a prime example of what I’m talking about. It’s their sixth studio album and it was released in 1984: the last one through the French label Carrere Records, because a year later the Barnley band signed to EMI. Those were the years in which SAXON were trying to conquer the American market, after having reached the peak of their success in Europe with some classic NWOBHM albums that achieved good chart positions and sales certifications. "Crusader" followed the direction taken by the band with "Power And The Glory", which saw a shift towards a more commercial sound, in order to get mainstream popularity, riding the wave of the emerging Glam, Hair and Pop Metal scenes. On one side "Crusader" reached the goal of opening new markets, since it sold over two million copies, but on the other represented the start of SAXON’s musical decline. Except for the title track that immediately became a fan favourite Heavy Metal hymn, the rest of the album is a clear step down from their early efforts in terms of quality and musical inspiration. Here we have an awesome and epic song in the beginning, then eight weak tracks absorbed into the typical 80s mainstream Pop Metal style, in the vein of DEF LEPPARD, KISS etc. The real problem is that these commercial songs are a very mediocre experience all round, light years away from good and enjoyable mainstream Heavy Metal albums from the 80s, like MÖTLEY CRÜE’s and DOKKEN’s early works or WHITESNAKE’s self titled masterpiece. Poorly composed and with a ridiculously soft guitar tone, this album is filled with tons of cheesy melodies and Arena Rock choruses, that for sure are able to create a hand clapping and engaging atmosphere during a gig, but on the other hand cut too deeply the cords with SAXON’s rebellious and motorcycle inspired NWOBHM past. However, besides the title track, there are some other good points: a fantastic front cover artwork (historical subjects are a SAXON’s trademark), killer vocals by Biff Byford (as always) and a very good performance behind the kit by Nigel Glockler (this was his second album with SAXON). In this particular expanded edition, reissued by BMG, a bonus CD with a demo recording session from September 1981 (Kaley Studio tapes) is included and all is enriched by a 24 pages media book with lyrics, rare pictures and memorabilia. The extra tracks are basically the same ones that appear on the album, but they’re pretty interesting because some of them sound better as demo outtakes than in the official studio session. And now the big question: should you buy this album? Yes, if you’re a SAXON die hard fan like me or if you’re into the popular Heavy Metal sound from the 80s. The title track alone is worth the price. But if you’re new to these English legends, "Wheels Of Steel", "Strong Arm Of The Law", "Denim And Leather" or "The Eagle Has Landed" will be a better purchase. Otherwise one of their latest live compilations could be a good option, because all their classic anthems are generally included in these albums, the song ‘Crusader’ too. www.saxon747.com, www.facebook.com/saxon, www.bmg.com