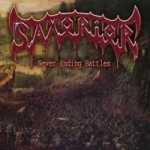 SAXORIOR (short for Saxon warrior) from Eastern Germany deliver Pagan Metal. They have been around for quite some time, so what we actually get is at least well executed. As far as I found out, the CD deals with the Thirty Years’ War (1618-1648) in Europe. One of the topics you don’t get too often in terms of Metal. Don’t ask me why – it’s a mystery. Partly, this album is quite dark, underlining the gravity of the lyrical concept. I also like the Black Metal vocals quite a bit, they’re full of pathos. What I simply can’t stand, though, are the overly happy parts in songs like ‘Reasons Of War’. Ridiculous. Well, for some people that’s probably gonna be cool in a live situation. You’ll see happy people hopping all around the place, I bet. Absolutely not my cup of tea. And it’s not only the keyboarder’s fault as with his work he supports the songs pretty well. The other point I simply have to criticise is the AC/DC cover ‘For Those About to Rock’. Man, I love AC/DC but I never heard a truly good cover version on CD. Why don’t bands finally stop trying? On this particular version, the vocals suck big time! Apart from that, people into (German) Pagan Metal will probably enjoy this record quite a bit. www.saxorior.de