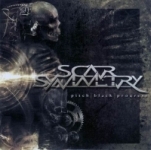 There is really no title imaginable that would be more inaccurate for this record since there are absolutely no traces of blackness or progress to be found therein. If anybody would pay me to praise this piece of junk I’d probably label it as the prototype of how modern Metal has to sound era vulgaris 2006. In fact it’s just another faceless product, customized for perfect cross-marketing to anyone who thinks he’s into the more extreme. Based on precise staccato-rhythms as established in the last decade by the likes of FEAR FACTORY, mixed with some alibi-grunts and graced with the cheesiest of refrains that make all the glam-fags of the eighties look modest, the second album by SCAR SYMMETRY is a horrid example of music played straight from the wallet. Which is really a crying shame if you consider the amount of talent that here and there shines through the surface of the polished and boring standard-sound, especially in the guitar-soloing which is sometimes bordering on the brilliant. So better ignore the massive praise that this most likely is about to receive and rather go for the re-release of SADIST’s godly “Above The Light”, which still is a much more valid statement concerning the sound of black progress. As for SCAR SYMMETRY: “Sentenced to death by the metal inquisition…” Website: www.scarsymmetry.com.