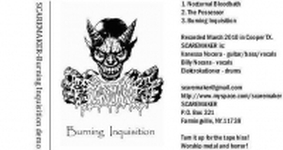 Three song demo tape from this new USA band, which features band members that have been related to other bands like DECREPITAPH, SHROUDED, TOMBSTONES (USA), FOREBODING, ETERNAL SUFFERING, STONE EVIL, SKULLETON, SCUM BITCH, SKINCRAWLER, BASTARD CROSS, PROCREANT, FESTERED, BLACK PENTAGRAM CULT, BEYOND HELL and ENCOFFINATION. No, I am not kidding relating all those bands, which is where the drummer has at one point or another being a member of. Ok, this infernal trio (including a female bass / backing vocals) and Razorback Records Billy Nocera on vocals, brings us a deep occult form of Death Metal, basically in a mid-tempo attack with some few faster passages, and gargling vocals from hell. References can be made with early INCANTATION, AUTOPSY, DEATH, CARCASS, with a bass-like guitar sound, some sloppy sounding drums (but not a sloppy performance) and growly vocals. Yes, this sounds old school, but then again it is so far not interesting enough to go back for more. The band does actually have a sound of their own, no matter how present their influences are, and there are actually some great riffs in their slower parts, especially in the last song ‘Burning Inquisition’. But at just three (quite short) songs, I need to hear more to really appreciate the band, as I am confident there is potential here. www.myspace.com/scaremaker