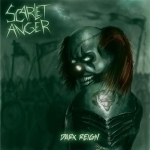 Luxembourg isn’t necessarily any THAT known hot bed for some intense Thrash Metal, but I guess that’s about to change if this relatively young Thrash act named as SCARLET ANGER can work out as sort of a road sign for some larger and quality Thrash Metal invasion coming from Luxembourg. "Dark Reign", which is SCARLET REIGN’s first and only album so far – and which has been mastered by no less than one Jeff Waters from that one pretty known Canadian Metal act, is a surprisingly solid and well-thought-out played wholeness of Thrash Metal that takes a few bits from the American territory of Thrash (EXODUS, SLAYER) and a few bits from the European Thrash cake as well (EXUMER, DESTRUCTION). It’s hard yet somewhat unnecessary to pinpoint that SCARLET ANGER would abuse the sound of some certain band shamelessly because undoubtedly they have tried to get some best ingredients of both American and European Thrash territories sucked in for their own brand of thrashing madness. The riffs are everywhere on this opus, like Gary Holt would have underlined them the importance of heavy and brutal riffs, just to make their Thrash Metal to grow bigger balls, kind of. SCARLET ANGER’s intensity knows no boundaries indeed: in the middle of blitzkrieg-ish Thrash riffs we stand, no doubt. With varying tempos, some faster and more intense riff fests to slower, more meaty and chunky rhythms – and a couple of progressive solutions thrown in song structure wise, SCARLET ANGER manage to keep things interesting enough and somehow fresh throughout the entire material on "Dark Reign", clearly avoiding the ugliest and most obvious traps to be considered as just your average Thrash Metal act only. Vocalist Joe Block is vocally closer to Mem von Stein of EXUMER with his raw grunts than, let’s say, Rob Dukes of EXODUS, just to give you an idea how Joe might sound like. Is there something more to tell about this opus then? I suppose there is, but not millions of words, or even millions of different ways would be enough to tell how SCARLET ANGER’s debut album truly sounds like. Do yourself a favor to find it out by yourself by giving a sincere listen to SCARLET ANGER, okay? Also, if you want to sneak a little bit about them, then simply head your way to www.facebook.com/scarletangerband.