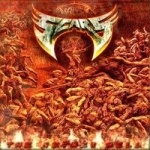 Brazilian Thrashers SCARS were put together in 1991. They released their debut album “Ultimate Encore” via Encore Records in 1994. SCARS played over 500 concerts in their career before they disbanded in 1998. Guess what – they reformed in 2004 and I have to admit I can’t find anything wrong with that. Their old school Bay Area sound (with several hints of a New York OVERKILL) really makes me get up and shake my lazy butt! The drums sound a little thin to my ears, though, but the songs definitely rock: ‘Warfare’ and ‘Creatures…’ show SCARS’ classic roots; ‘Legions…’ and ‘Hidden Roots…’ have a certain Death Metal undertone while ‘Return…’ and the title track are pretty much heavy headbanging tunes – almost transport my mind to the next Metal show. Watch out for these guys! You can download music and videos from their official site: www.scars.com.br