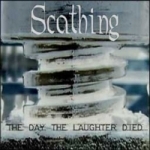 This quite young three piece hails from Switzerland, got together in October 2000 and already released two demo CD’s ever since. Not only a rather unusual, but in their case also a very in-effective decision. It’s not that the members in the band are immature sounding musicians, certainly not. Their overall performance is quite solid and the songs are not exactly what I would consider bad. But everything sounds way too calculated from my point of view. Death / Thrash Metal is a musical genre that mostly lives off the intensity, the energy and overall brutality. SCATHING unfortunately are still lacking in all of that. It seems to me that their main concern is to come up with a perfect performance instead of the right feeling and atmosphere. Just listen to their SEPULTURA cover of ‘Troops Of Doom’ – musically there’s nothing to complain about, maybe it’s even better played than the original, but it’s heavily lacking in the original charme. So, instead of releasing everything that gets composed in the rehearsal room straight away, the band should first of all maybe start playing live as often as possible in order to get the right feeling for this music. Further info: www.scathing.ch.vu