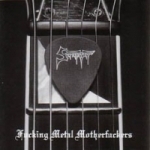 More than three years have passed by now since Chicago’s SCEPTER came up with their debut full length “I’m Going To Hell”. The album, which was the logical follow up to their two already very promising mini CDs (“Up Thy Ass” and “Metal Supremacy”), not only ended up being a pretty solid foundation for the three-piece from Chicago, the guys furthermore finally seemed ready to conquer the Metal world in general. But for some strange reason that never happened and after a long period of silence I already assumed that they had called the quits… until I got myself a copy of Slayer Magazine # 18. That issue not only featured a brand new interview with the SCEPTER guys, it also announced the release of “Fucking Metal Motherfuckers” after all. And “surprise surprise”, a couple days later I had the promo for the album in my mailbox already. After a few listens I can easily assure you, that nothing really has changed in the SCEPTER camp – they are still the same dedicated Metalheads we used to like and worship years ago. Which means, their songwriting is still very straight ahead and stripped to the core (the majority of the twelves tunes not even reaches the three minutes mark!), mainly built around a very CELTIC FROST-ish riffing and SODOM alike vocal delivery. Mix all that with a small dose of MOTÖRHEAD rawness and you already get 95% of the picture. Apart from that formular there’s also tunes like ‘Time To Bleed’, which even has got a certain ‘Mandatory Suicide’ feel to it and ‘Metal Means Stupid’, which could also have been one of the slow SLAUGHTER (Canada) tunes, in the vein of ‘Tales Of The Macabre’ (if it had a different tuning / production). So, as you can see, this record by no means fits into any current trend within the boundaries of Metal and therefore can easily be worshipped any time, again and again. A great record, with a very cool album title! Label contact: www.merciless-records.de