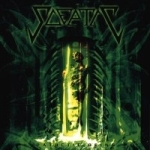 Holy shit!!!! This is brilliant! If you are into technical Death Metal in the vein of old ATHEIST, NOCTURNUS, old CYNIC, GORGUTS, newer DEATH or PESTILENCE make sure to get your hands on this new release by Polish SCEPTIC! The band consists of extremely talented musicians, delivers eight very complex own compositions (+ intro), as well as a perfectly executed cover of the old NOCTURNUS track ‘Arctic Crypt’ (from the recently re-issued “Thresholds” album). While many other technical acts are often too much concerned about their weird song structures and individual playing abilities, SCEPTIC don’t forget about the actual brutality of this genre. That results in some very devastating material which (because of all its little bits and pieces) never gets boring at all and (mainly because of the raw vocals) still comes across very aggressive sounding. SCEPTIC guitarist Jacek Hiro (who’s also involved in DIES IRAE and DECAPITATED) formed SCEPTIC with drummer extra ordinare Maciek Zieba back in 1995. Three demos and another full length album (“Blind Existence”, 1999) were released prior to “Pathetic Being”, the band hooked up with VADER’s management and already played on the most important festivals in their home country. So, now it’s time for the rest of the world to discover this little gem as well. Impressive!!!!