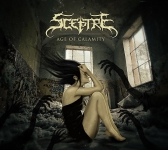 SCEPTRE are considered as true Thrash Metal veterans of the whole Indian underground Metal scene; they have been around for 16 years, since 1998 actually. SCEPTRE released their debut album "Now Or Never" on the small Indian label Counter Culture Records back in 2008 – and the band’s follow-up record, "Age Of Calamity", was kicked out of the door 5 years later, in 2013. "Age Of Calamity" is a concept album, dealing with a poor state of women in today’s society of India (as we all know, some of the recent news coming out from the Indian territory, have sadly told about some hideous gang rapes of women, etc. in recent years), so the band also has a strong sociopolitical message incorporated into this 2nd full-length release of theirs, which surely makes things a bit more special yet most importantly, worth thinking not only for the listeners of this SCEPTRE’s follow-up album but also everyone else in this (brutal and ugly at times) world. So yeah, SCEPTRE flag for some truly important issues on "Age Of Calamity" that their own home country is currently suffering from, but they also do flag for a convincingly played, crispy – and even relatively technical Thrash Metal, putting together an enjoyable package for all serious Metal maniacs out there that are hungry for mean, ripping and melodic sounding Thrash Metal. Vocalist Samron Jude has also got a powerful voice, sometimes using it the way like truly wanting to underline the importance of some certain meaningful lyrics within the songs, really succeeding in bringing an extra dose of anger into this well-working wholeness by his hate-filled and punishing vocal lines. SCEPTRE also manage to keep their songs varied enough, changing tempos well and naturally, without sounding forced or anything like that. They sound well rehearsed and somewhat tight on this new SCEPTRE record, and hence in my opinion the songs on "Age Of Calamity" also tend to stand out so effortlessly for them all in all. Bay Area-tinged Thrash added with a fair dose of SCEPTRE’s own special Indian spices? Let’s go for that description for now as it fits well to sum up my thoughts and feelings ’bout this release well enough. Find SCEPTRE at www.sceptre.in or www.facebook.com/sceptreofficial