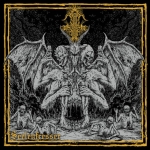 What do you get when you cross SETHERIAL circa “Nord” or MARDUK circa “Nightwing” with what’s commonly been referred to as raw Scandinavian Black Metal? SCHRAT, and it rules. Compared to its predecessor “Alptraumgänger”, “Seelenfresser” has better songs, riffs, vocals, and production – an improvement on literally every front. That’s not to say “Alptraumgänger” was bad, but rather to reinforce just how good “Seelenfresser” is. And the adventure begins with ‘Parasiteninvasion’. What a song! In general, this is a pretty typical Black Metal piece. But when one gives it a second spin, the mid-paced layers are there, stacked one upon the other. Awesome. Beyond that, you’ll also notice the album’s very raw production. If you’re looking to impress your wild eyed, spiked gauntlet wearing friends, drop one of these tracks on your “Songs To Burn the World To” playlist. Sure, it’s nothing particularly original. Sure, it coulda been trimmed a bit here and there. But what the band lacks in novelty, it makes up for with sheer commitment. Pretty, atmospheric takes on Black Metal are cute and all, but the genre was originally conceived as furious riposte to a controlling and uncaring creator. This antagonistic spirit shines strong with SCHRAT. I had a blast listening to this latest iteration of furious Black Metal music from a talented and dedicated Black Metal band. More SCHRAT information at www.facebook.com/schratstahl, label contact: www.facebook.com/folterrecordsgermany