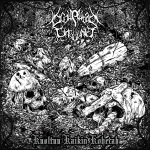 SCOLOPENDRA CINGULATA is the name of the mediterranean banded centipede. I often have work out in the countryside and it’s actually one of the few little critters I have to watch out for around here, as it fucking stings. It’s also, as you can see, the name of one of the few Metal bands coming from Kazakhstan. This EP begins with a distorted guitar intro after which we are cast into music that is very reminiscent of old DARKTHRONE. This first track is actually the most similar to the iconic band’s low-fi sound (third album onwards), as the following ones incorporate more strongly certain atmospheric simultaneous complements that give SCOLOPENDRA CINGULATA’s music some distinction. Still, raw Black Metal is always what this release is all about, with a very harsh and somewhat underproduced sound and aggressive instruments and vocals. Halfway along the lengthy first track (over 9 minutes long) we get a very atmospheric keyboard and percussion interlude before going back to the previous hateful aggression. It’s not the only such piece; soon you’ll even hear the sound of a battle accompanied by melodic guitars in-between more typical Black Metal parts. As the EP advances the music grows increasingly dense with those atmospheric, even Folky elements underlying the raw Black Metal and that create a kind of mystic feeling together with the thick eastern sound of their language and, I guess, the surprisingly poetic lyrics (judging from the power of automatic online translation) that, according to the band, have an ultimate meaning: all men are good when they’re dead. The last track is probably the most instrumentally melodic and even bizarre, with dissonant notes and solos, a track that is nevertheless always brutal. The EP ends with the sound of a fierce fire, like the all-consuming flames of Hell. In a world once overrun by DARKTHRONE clones, it’s agreeable to find that some bands still have some personal feeling. If you’re into this kind of sound you should definitely check these guys out. For all additional information check out the following sites: www.facebook.com/scolopendracingulata, https://narcolepticaprod.bandcamp.com, http://satanath.com/distro