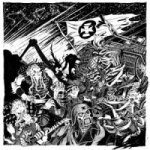 This band may already be on some of your radars, for they were on the bill at the last Black Castle show in late 2009, which ORDER FROM CHAOS headlined. The crowd seemed to enjoy them, and I see no reason why that positive experience should not translate to the privacy of one’s home. The studio versions of their live set is reminiscent of the EXODUS slogan, "Good, friendly, violent fun." Yes, this is a thrashy, Death Metal album, but it takes place on Mars, so let’s enjoy the ride. On the whole, the album inherits its structure from the simpler, punky side of Death Metal. Although it may come as a bit of a surprise, since this is likely the first many readers have heard of them, but this is the band’s fourth album. Their debut was in 2000. For ten years they’ve slaved away, and this album shows a band still gunning as hard as ever. www.hailscorchedearth.com