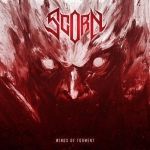 Ten tracks are presented by SCORN from France on their debut. The band seems to have appeared out of nowhere, since no previous releases are listed. Sometimes I wonder if it is not also a big risk for a record label to sign such bands, but in this case Great Dane Records did everything right. It is a mixture of American Thrash Metal (OVERKILL, EXODUS, TESTAMENT) and Death Metal riffs here and there, while the vocals are constantly Death Metal grunts. Of course the name MALEVOLENT CREATION is at hand, but SCORN are taking things a little more moderately. So you will not find high-speed blasting all over the place, instead more nuanced mid-tempo. Which is, in this case, a great idea. Because some riffs are, at least for my ears, a heavy reminder of the later outputs of CARCASS. A bit melodic, a bit morbid, a bit swirling. Even if the music sounds pretty simply structured when you first hear it, on closer inspection it is definitely not. There are the many small interspersed musical delicacies like DEATH used in their later years. In fact, the more I think about it, “Winds Of Torment” is a found treat for any fan of albums like “Symbolic” or “The Sound Of Perseverance”. So that should be motivation enough to take listen by visiting www.facebook.com/scornthrash or www.facebook.com/greatdanerecords