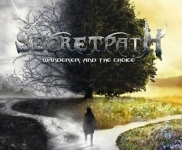 Being original and unique in Metal music in general, deserves certain amounts of respect in terms of plain musical achievements, I mean. It’s proven many times that it’s really damn difficult for bands to be original sounding nowadays; in reality, everything’s basically been done already – and inventing something totally new music wise (and not gimmick wise) within Metal music that would grab people’s immediate attention, it’s like a shot in the dark really: you can rarely see that happening anymore, although there are always some exceptions out there, too. One of those exceptions, breaking this norm in generally accepted Metal genres, however, is this Italian act SECRETPATH that crosses quite a few genres on their 2nd album, "Wanderer And The Choice". By crossing genres I am pointing with my finger to such genres as Black Metal, Death Metal, Thrash Metal and just overall Metal music that is spiced with – sorry to spit this out THIS sincerely, some horrendous attempts to getting some colors of Gothic, Operatic, Folk, etc. shit, painted against the same horizon. SECRETPATH obviously – and undoubtedly, have lots of good – as well as not THAT good ideas that they would like to use for creating a grande illusion of theirs about some very unique, breath-taking and spine-chilling performance musically that – naturally in the best scenario, would turn most of us to their fans. Well, I believe that’s what will happen most likely too but I myself felt like they have chosen a bit too big cake to be split this time around. It’s okay and cool to split vocals in between Black Metal snarls and Death Metal grunts on Metal albums; many bands do that, and SECRETPATH is no exception to this rule either. But why on earth they felt like those semi-dramatically yet unprofessionally spoken / whined Gothic type of vocals would increase the album’s value in any originality, or made this record somehow more ‘art-like’? For me they did just the opposite, working out a real turning-off force. Please do erase them out from your next recording because you would do just MUCH better without them, believe me. Then, although SECRETPATH have striven determinedly for originality and complexity on "Wanderer And The Choice", the album ends up sounding pretty messy, having not coherent feel to it. Like I mentioned previously, the guys surely have plenty of good ideas in their possession but using them the way how they have unfortunately used them, makes no sense to me much at all. They should also remember ‘less is more’ sometimes, just like such a song as "Essence Of Chaos" proves it. With a truckful of ideas – pretty experimental ones even, one can also get a nice, stripped down and effective result. Keep it real folks without any mumbo-jumbo artsy-craftsy bullshit. More about these Italians musical art though, can be found at: www.facebook.com/secretpath, label: www.artgatesrecords.com