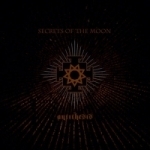 I have been listening to "Antithesis" numerous times. I have used headphones. I’ve been driving my car way too fast and I have played it at my stereo at home. As they say in the incredibly funny movie Top Secret (1984): "This is not Mel Tormé!". "Antithesis" is not "Now, Diabolical". It’s not even close, despite the more direct approach in "Versus". It is rather the album I hoped "Now, Diabolical" was going to be. "Antithesis" is one of the strongest extreme Metal albums of all ages. Is it Black Metal? Is it Death Metal? I don’t really know, but it’s very very dark. Yes, it is darkness enfolded into a crystal clear production. 70% of the album consists of mid-paced parts that evolve all the time. If you take the whispering ‘Metamorphoses’ it appears as being rather monotonous and somewhat boring. The bombastic start-stop-start-stop rhythm in the first part of the track evolves into a monstrous rhythm-Godzilla. This track is cleverly placed in the middle of the album, giving us time to breathe. But Secrets Of The Moon is not only bombastic. In ‘Confessions’ the melodies sneak upon you. The first few times it didn’t grab my attention as I found it a bit tiresome. It takes like 5 minutes before the band chooses to change the tempo noticeably… as they slow down and give us a graveyard section. It’s like they lay in their graves playing this short segment. Slowly but surely ‘Confessions’ grow into our minds, leaving its mark in our souls. However, it’s the track prior to ‘Confessions’ that opened my mind to "Antithesis" as a whole. After 1:15 minutes the band bombs us with a part that lasts 55 seconds. There’s nothing that hides in the mix, they have not included keyboards, female vocals or whatever you desire into these 55 seconds of brutal Metal. It’s just brutal Metal. And the best is yet to come. After Secrets Of The Moon has repeated the words "You Cruel King" a few times, they just change direction completely, only to reveal one of the most colossal parts I’ve heard for years. After 2:55 minutes the band gives us a part that has (slow) headbanging written all over the place. It could be that this is unintentional, but it works wonders for me. No, I’m not getting to the point yet. ‘Ghost’ has a great drive coming from the fine melody in the beginning. You can actually hum along with it. And here’s one point. Secrets Of The Moon writes dark music with some melodies that could easily be considered too light. But these are balanced with heavy drums and regular tempo-changes. And a voice that must’ve been spawned in hell. It is raw and crisp. And varied. Not only in the said track, but in the album as a whole. The vocals are whispered, shouted and sung in a grim manner. "Antithesis" has a levelled production. The instruments are clear and present, and those few effects they’ve added appears equally clear with the exception that they are often mixed lower. The keyboards part around 6 minutes of ‘Ghost’ appeared after more than three spins. But there are effects that are more prominent. In ‘Seraphim Is Dead’ there’s a horn-section that appears only once. I won’t reveal to you exactly how it is and when it appears, but I promise you that it should make more impact than those on the mentioned Satyricon album. And it’s just so cool that Secrets Of The Moon uses this only once instead of repeating it. This improves the impact even further. While being on ‘Seraphim Is Dead’, I must add that if you come to think that ‘Confessions’ and ‘Metamorphoses’ were too monotonous, the band makes amends for this "monotony" in the progressive highlight that is named ‘Seraphim Is Dead’. The track contains all the ingredients you need to describe Secrets of The Moon to your neighbour. Even the cymbal-solo towards the end of the album feels in place. And just when you thought you’d heard it all, the band gives us the gigantic ‘Lucifer Speaks’. It’s doomy, it’s incredibly heavy and it’s like a knife piercing your flesh. You know you shouldn’t do it, but it feels good anyway. ‘Lucifer Speaks’ gives me the chills. It feels so good. As it says in the lyrics: "… this colossal darkness…". Even when they gather speed, ‘Lucifer Speaks’ is heavy. And deadly. If I shall criticize anything it has to be that the band has an intro and an outro that feel superfluous. I am sure there are reasons for these short pieces of Metal, but they don’t add to the mysticism. I would’ve preferred (musically speaking) that the album began with ‘Versus’ and ended with ‘Lucifer Speaks’. Then this would’ve been the perfect extreme Metal album. With "Antithesis" this German band has managed to make a massive album of original extreme Metal that grows on you. I didn’t quite catch it the first few spins, but it grew on me and it still does. The musicianship is strong and arrogant (if you will), because these guys don’t show off. They just give us their vision of utter darkness, with small signs of hope and light. And the strangest thing is that even if the production is clearer than ever, they still fail to remind me of other bands, just as they didn’t do with "Carved In Stigmata Wounds". But be patient, because you need to give "Antithesis" the time it demands. www.secretsofthemoon.org, www.lupuslounge.com