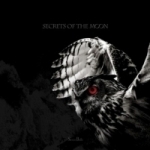 Have you ever felt that there is an upcoming darkness surrounding you in a full moon cold night? Have you ever sensed the sound of bells coming out from nowhere? With no reason at all… it freezes you… it makes your soul turn to stone… enter the sounds of soul condemnation… formed back in 1995 this is just the fifth record of this German act. As of 2007 no original band members are left, thus the name has continued. SECRETS OF THE MOON is one of those bands that have been dwelling in the deepest reigns of the underworld, yet they have always been a band which creates pieces of black art up there with the highest of them all. Many people were not attracted to them due to linking them to other kind of German Black Metal bands (NARGAROTH, MOONBLOOD) but that is really far away in all aspects. Some others were turned off due to the band name… sounded probably ´too romantic´… their earlier works can be related to Black Metal, but of that kind which was more complex, deep and artistic in the pure musical senses of the word… I have been following this band since their very early stages, and they have always been a very competent one, thus at times I felt there was something missing… that something started to evolve since their album “Antithesis” and a lot more on “Privilegivm”… I knew they were going to achieve it… those were just the first steps into creating something into their very own dark path… it all came to this… to the “Seven Bells”… references to be made can be applied as well to SAMAEL, to CELTIC FROST to “Blood Fire Death” era BATHORY to “Killing Technology” VOIVOD… to AUTOPSY… to the darkest paths of BLACK SABBATH… they have trespassed boundaries in what extreme Metal is, to become this… the production is close to perfection… the deliverance, the musical execution is also near to a non-human capability… it shows a band that not only plays… they totally dominate their instruments… but instead of showing off how good they are playing, they just show us how great they are composing and as a secondary effect we can appreciate the magnificent musicians they are… most of the speed here is in a very active mid-tempo attack, with short but effective faster bursts here and there… a special mention must be done for the vocalization as it is done with anger and despair, yet with class and even using at the right times a more melodic approach… but make no mistake, this is occult Metal as few can deliver and a jewel on its own… must mention that there are a few special editions of the album with alternate artwork and some with extended booklet… this gets my vote for one of the best releases in 2012… www.secretsofthemoon.org, www.facebook.com/sotm777, www.myspace.com/secretsofthemoon, www.lupuslounge.com