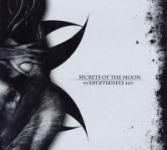 SECRETS OF THE MOON
The Exhibitions
(Lupus Lounge)
17:22min

With last year’s exceptional full length album "Carved In Stigmata Wounds" Germany’s SECRETS OF THE MOON finally managed to gain the attention they had deserved a lot longer already. The record was a highly impressive and extremely unique sounding musical statement, easily proving everyone wrong who considered the raw Black Metal style as a rather limited form of music. This three track MCD is their first release ever since, but according to a statement of the band "in no way a reflection of the style of the next album!" Well, I personally wouldn’t mind getting a full length record like this as it once again became really outstanding, yet a little different from their previous offering… The overall writing formular seems less sophisticated and more straight ahead, yet still very focused on a clever songwriting (an aspect that many bands seem to forget about while trying to sound extreme these days). This ain’t the usual leftover songs that weren’t good enough to be included on the last album, but freshly recorded new tunes (well, in case you still consider January 2005 as "fresh"…). The overall atmosphere of the EP is very cold, surprisingly heavy, the songs do offer great dark and always very crushing riffs and the vocals get performed in an excellent grim manner… Needless to say that the whole session was once again perfectly produced by MK at Studio E, so expect nothing but a raw, yet very powerful sound here! Next to the two own tunes (‘Bleakstar’ and Exhibitions In The Grey Zone’) you’re about to experience SECRETS OF THE MOON’s interpretation of the DARKTHRONE classic ‘Under A Funeral Moon’, which turned out incredibly strong as well. So, if you’re seriously into the secrets of the black arts, you should make sure not to miss out on this MCD as well. It will be out on September 17 as a limited (1000 copies) digipak. Links of interest: http://come.to/secretsofthemoon, www.lupuslounge.com.