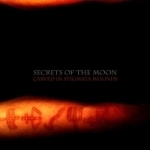 It’s been quite a while since I heard any new material from SECRETS OF THE MOON. The freshest was actually their "Stronghold Of The Inviolables" album, which already dates back to the year 2000! But when they introduced a whole lot of new stuff at our 10th Anniversary Festival, I already knew that they musically had matured in quite a massive way and was really looking forward to hear this record. At first little worries came up when I noticed the playing time of "Carved In Stigmata Wounds"… It even surpasses the 70 minutes mark and records of this length mostly start to bore me pretty quickly as in most cases they suffer from lots of filler tunes. Not in the case of SECRETS OF THE MOON though! Even though the individual songs settle between 7 – 9 minutes, the album as a whole is so full of exceptional ideas and thrilled songwriting that it left me completely speechless! These guys are the living proof that there’s still innovation possible within the boundaries of the Black Metal genre and that you can easily come up with material that does not sound like DIMMU BORGIR on one hand and DARKTHRONE on the other. SECRETS OF THE MOON obviously found out that a good Black Metal song is neither about playing as fast, shitty and straight as possible, a poor rehearsal type production nor about uninspired shrieky screaming. In their case it’s quite the opposite around actually. The production is raw, yet very solid, powerful and crystal clear, the vocals grim, but easily understandable and the songwriting full of variation. The rather long playing time of each track allows them to create dark atmospheres and various moods and keeps the record interesting from start to finish. What I furthermore really appreciate about these guys is the fact that they seem to build their music on a rather old school Thrash foundation. It is reflected in excellent riffing ideas and unique drum patterns, quite unlike the majority of bands these days who don’t seem to care and just repeat one particular (mostly even boring) riff over and over again. If you remember the thrill that the opening of SLAYER’s alltime classic ‘Hell Awaits’ creates, you already get an idea of what I’m talking about here, cause "Carved In Stigmata Wounds" opens up in a quite similar fashion – yet totally different, haha! All this, along with clever incorporated moody keyboards keeps the band interesting and easily makes you listen to this fantastic album in a row! I just hope that the guys will finally be rewarded for their hard work over the last ten years, so go out an buy this little gem when it hits the store in mid April! Simply essential! Band website: http://come.to/secretsofthemoon, Label contact: www.lupuslounge.com.