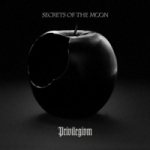 Since nearly 15 years I’m a close observer / fan / supporter of the German Black Metal underground but even after all those years only a few German bands are considered by the world-wide Metal community as a so called cult act. Next to LUNAR AURORA without a doubt SECRETS OF THE MOON are one of the bands who deserve this title due to their never-ending search / fight against invisible scene boundaries. What began over ten years ago with their fabulous “Promo Tape 98” – still one of the best underground releases ever, proved by the fact that the material has been re-issued countless times – has finally brought the band the status as of one the leading Black Metal acts. “Privilegivm” is the next and third chapter under the wings of Prophecy Productions and the expectation had been enormous high. So what can we expect from a band which was forced to return from the abyss after the unavoidable band ‘modifications’ (the last remaining founding member Daevas has left the band in 2007)? The album is a consequent follow up to their former releases “Carved In Stigmata Wounds”(2004) and “Antithesis” (2006) and the first track ‘Sulphur’ (with a short interludium) is a perfect example for the SOTM sound anno 2009. The times of pure aggression – as reference the songs ‘Psychoccult Hymn’ or ‘Kaosthrone’ from their debut- are in some way gone, but that does not mean that the music sounds bleak or dull, they just channel their emotion in a more controlled / effective way. The band has reached a new level for their music and I really think that it deserves the definition as Black Metal art. Nearly all songs on “Privilegivm” are reaching the 7 minutes barrier but the music needs this time to capture the essence of its creation – especially the perfect interaction of the guitars and drums is remarkable – and even after listening to the 13 minutes key song ‘Harvest’ dozen of times the song is still in the position to offer several new layers. There are only a few bands which can recreate their style again and again and still stay true to their roots – “Privilegivm” is not a standard release, far away from easy listening Black Metal and maybe too complex for some listener – but a bottle of red wine is also becoming better year after year and time will prove me right with this release. For more info check out: www.secretsofthemoon.org, www.lupuslounge.com, www.myspace.com/secretsofthemoon.