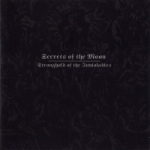 SECRETS OF THE MOON
Stronghold Of The Inviolables
(Cicatrix / Red Stream Records)
30:43min

It’s really a pity to see how these guys from the northern part of Germany still have to struggle… For unknown reasons they never really managed to gain the recognition they surely would’ve deserved for quite a while already. It almost seemed to me that the four guys in SECRETS OF THE MOON are cursed or something, cause ever since their origin they always delivered convincing raw Black Metal in its most traditional format, but with that obviously didn’t exactly fit into any of all these stupid money making business machines that dare to call themselves “record labels”. Even their debut album “Stronghold Of The Inviolables” originally only came out in a limited edition of 200 vinyl copies on the small underground label Sombre Records over a year ago. So, I bet most of you didn’t even know about its existence (me included…). But luckily the Red Stream sub label Cicatrix was nice enough to re-issue the material on CD format, so that a couple more people will finally be able to experience the band’s qualities. I was actually kinda surprised that none of the seven tracks that originally appeared on the ’98 promo tape (which also included ‘Through Golden Spheres’, the track off the split-7″ with LUNAR AURORA) made it on this album, but that luckily doesn’t mean that SECRETS OF THE MOON have chosen a different musical path these days. It’s still raw, cold and eerie Black Metal with grim vocals, the usual guitar tuning and mostly fast drumming. But SECRETS OF THE MOON were clever enough not to play full speed ahead all the time, but incorporate lots of slower, dark and quite emotional passages into the material instead, which make the album even more enjoyable as it never really gets boring this way. Mainstream Black Metal fans should obviously avoid this release by all means, but all those of you who still prefer bands that musically still express themselves in the original vein of this once so rebellious genre, should definitely check out “Stronghold Of The Inviolables” as this is really Black fuckin’ Metal the way it was meant to be performed! www.redstream.org