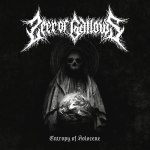 First off I can say that it was really hard to get information on SEER OF GALLOWS other than it is a one man band from Sweden. And that makes this album even more odd. I mean, we do have the well-known NWOSDM movement, which has been proven a blueprint for most Swedish bands playing any kind of extreme Metal. And all I can say after the fact is that I was pleasantly surprised. The album starts with a song that is part intro, part instrumental. Right off the bat, one can listen to a really heavy overall atmosphere with a curious twist: there is no sharpness or bite which has become so typical for Metal releases in the last decade. The treble is somewhat rounded and that single detail is asphyxiating, so to speak. The sound is huge and raw. But still, you can’t pinpoint exactly what SEER OF GALLOWS is all about. I found this both, exasperating and interesting. And then song number two hits. With a promising start, one realizes that this album means serious business. A mid to fast tempo mix of Black and Death Metal. The tremolo riffs lead the way with their eerie melodies backed by dense open chords. The guitars and the bass are massive, which is something you don’t usually hear in Black Metal albums. But this is due to the overwhelming Death Metal influence, which is also present in the vocal department: a coarse and harsh grunt that finishes off the combination. The sheer heaviness of “Entropy Of Holocene” is boosted with slow passages that make the mid and fast parts even more cruel and chaotic, although the album has a piercing accuracy in every aspect. The production, as said above, is heavy, dense and absolutely oppressing. The guitars are massive, followed by pounding bass lines and raw yet punchy drums. The performances are clear and solid, yet they don’t dwell into technicality or wankering. Their sole purpose is to add to the album’s atmosphere, constantly varying the tempos and adding and subtracting elements to keep things interesting. Every song is easily identified. Each one has its own character, but without taking away from the seamless flow as they progress. The mix is well done, with every instrument set in its right place and the vocals taking a vital role. It doesn’t matter what is happening music wise, the vocals keep everything tight and convincing. Now, regarding the mastering, I still can’t stand the absence of dynamics. I do miss the time when the “loudness wars” were non-existent. If “Entropy Of Holocene” had just a bit more dynamics, the experience could’ve been a lot more punishing. But that is just me longing for days long gone. Overall, SEER OF GALLOWS has proven that merging two of the most extreme Metal genres in a passionate way, not only gives the creators other means of translating their art, but it also offers to us, the listeners, new means of enjoying the experience. Support the band at www.facebook.com/seerofgallows and get their album from their label here: www.facebook.com/ibdc666