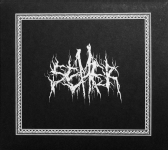 Formed in 2015, this band released their debut demo in April of that same year and in December they already have their debut album. This German group has a style that relates a lot to depressive Black Metal and also to what some people call Post Rock / Post Black Metal (whatever that stupid term is supposed to mean – Frank). Well, labels aside, they do have a quite good production, with a crunchy guitar tone, and with those dissonant melodies that recall some of early BURZUM with touches of SHINING and nods to Doom Metal like early ANATHEMA. As strange as it sounds, I also find some songs to have a good size of Seattle sound in there, early NIRVANA and SOUNDGARDEN to name a few. The vocals are what most likely resemble Black Metal, high pitched and tortured. While the band uses some traditional fast Black Metal bursts here and there, they are usually found playing at mid-tempo, where some of the influences I have mentioned shine better, and create that depressive state the band is looking for. Basically we have here 3 very long songs, each one well over 10 minutes, and one outro. Added here is their debut demo, which is basically in the same style, maybe with a bit rawer production values. I can feel the band trying to induce a trance-like state while listening to their music. Add the fact that they do their lyrics in German and this only adds more to their cold, melancholic and depressive sound. Yet, there is also melody and a quite interesting guitar work, not exactly using solos, but simple riffs that are quite common in Post Rock bands and traditional Heavy Metal. Evil Black Metal fans might be turned off by some of the influences found here, but those looking for creative bands that incorporate a wide array of styles, are encouraged to try this one. www.facebook.com/seherkult, http://seher.bandcamp.com, www.totenmusik.tumblr.com