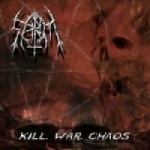 In my opinion the term Death / Black Metal gets used way too often nowadays… Mostly by record labels or journalists who are a bit uncertain how to categorize a band’s music in an appropriate manner. Fact is that the majority of those kinda bands not necessarily delivers a product that comes up with elements of both genres in a similar way. It’s more like, they either play brutal Death Metal with Satanic lyrics or Black Metal with deep grunted vocals or whatever… But in SEIRIM’s case everything finally seems to fit together very well. This German four piece spits out the material on their second full length “Kill.War.Chaos” with the sheer aggression of Black Metal, but performs everything in such a brutal manner that Death Metal fans should easily get a kick out of the 8 featured songs (+ 3 short intros) in the same way. The only negative aspect of the whole record still is the lack of catchy song structures, which isn’t meant in a commercial or melodic way of course. It’s just that SEIRIM’s material is nothing but intense yet with no real standout track. Everything was basically composed on the same level – mainly played fast forward and always straight into your face. So maybe the guys should concentrate on some more effective, crushing riffing or memorable chorus lines in the future a little bit more in order to better capture the listeners attention the whole way through. To really understand my little complaint make sure to check out the latest albums by DEW-SCENTED or VIU DRAKH. Even though both bands already understood the importance of those elements, they nowadays sound even more intense than ever before…! But apart from that – SEIRIM are definitely on the right way, so keep an eye on them.