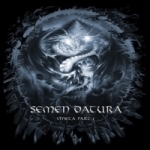 If I’m not completely mistaken, Vineta is the name of an ancient island which according to the legend drowned in the baltic sea some thousand years ago. Kind of a nordic New Orleans if you will… Since this was my first association when I first received the second longplayer by SEMEN DATURA I expected something like a conceptional record. Strangely enough I found absoutely no response in the lyrics, since the only “maritime” track ‘The Pearl Of The Baltic Sea’ deals with the beautiful island of Ruegen, which seams to be the home of this German five-piece. Anyway, when it comes to the music, I’ve to admit that there’s nothing bad to say about it. Unfortunately there’s not too much good to say about it either. This is probably the prototype of what you would call a professional, modern Death / Black – album. The playing abilities and the production are flawless, the style is best described as a mixture of the early Gothenburg-sound and the more melodic Black Metal approach that Swedish bands are known for. What I miss in this output (and dozens of others that flood the market each and every month) is something that sticks with you and gives the music a unique character. The main problem in today’s scene is not necessary the lack of quality but the lack of originality. If you’re into this kind of music for a while, you’ve probably heard everything on this record before. It’s no question that we’re talking about very talented musicians here, but they’re simply not able to create something clearly recognizable as their own (yet). Die Hoffnung stirbt zuletzt… www.semendatura.com.