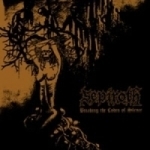 First contact with these Dutch deathbanger quartet was seeing them open for OBTRUNCATION and SINISTER in 2007. They put up an energetic and convincing show despite their young age. The same goes for their debut album "Breaking The Codes Of Silence". Their Death Metal is a juicy and powerful mix of groove, brutality and intensity. Just the way I like it and something I hope to find more in the Dutch scene. There’s not that much info I can give you on them except that they started as a Black / Death outfit but today are shaped into a buldering Death Metal machine. After a demo and the "Dying For Hatred" EP from 2007 Dutch Crossfirecult Records released this first full-length. On one hand you’re served a heavy dose of groove which warped me to the godly ninetees Death Metal from Sweden and Finland like GRAVE, DISMEMBER or even PESTILENCE (yeah, I know; weird to mention Finnish without naming an actual band, but you’ll get my point) with dark and evil riffing. While blasting they crush on a scale like MYRKSKOG and SINISTER. Speed is variating which is another big plus. The melodies are cathcy but not like glue and always with the right dose of brutality and power. Vocalist Ben’s voice reminded me of Karl Willetts of BOLT THROWER and I’m pleased to hear such a brutal growl. It adds an extra dose of old school vibe! Everyone gives all he got and that’s yet another plus. For a debut this a nasty and venomous effort. A very cool one, played and produced tight but without any significant standouts or highlights although a track like ‘Dying For Hatred’ increased my body-temperature with a few degrees. Although they’re rather unknown at this moment, I hope this will change ’cause the potential is there and I feel a huge monster can grow out of SEPIROTH. So everybody: check this band, support them! Go to www.myspace.com/sephirothnl where you can find the entire album for download. A very cool initiative and this should be honoured by extra support (and plus). So check this album, it’s a blast!