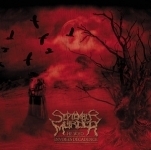 The four piece SEPTEMBER MURDER is around for quite a while now. Hailing from Thale at the edge of the Harz Mountains, deep in the heart of Germany, they released an EP and a full-length album to date. "He Who Invokes Decadence" is their second album, the first stuff I heard of them, and I am pretty sure I haven’t missed much yet. Roughly speaking, SEPTEMBER MURDER can be filed under Progressive Melodic Death Metal. Which here means, they are trying to mix song structures in 1970s Art Rock style with break overkills that remind of WATCHTOWER and guitars that sometimes sound like newer IN FLAMES and sometimes like MESHUGGAH. Sounds confusing? I wish it would have been confusing enough to risk a few more listening sessions. Sadly this album lacks of nearly everything over nearly the whole distance. Art Rock implies musical warmth and feeling. Can’t find much of that here. On their early records, WATCHTOWER knew how to combine mathematics and Metal without being boring or monotonous. SEPTEMBER MURDER are hardly able to do that. Real monotony in extreme music is something only MESHUGGAH can use without being annoying, by the way. Only the guitars in the style of IN FLAMES are adopted pretty well. Too sad that this is not a sign of quality anymore nowadays, since Gothenburg’s former flagship flooded years ago. And those Metalcore moments I found make the whole thing not one iota better, since this style of music is the most boring and overrated I ever heard in Metal. All this is somehow held together by exchangeable extreme vocals, another thing that’s somehow bugging to me. As for the first seven songs, "He Who Invokes Decadence" has its best moments, when the band comes along a little more straight and harmonic, like in ‘Two Culprits, One Oath’. But these moments are rare and sometimes get harshly destroyed by dissonant breaks or unmotivated blast beats. The more I tried to get an access to the album, the more I failed. Maybe this stuff is progressive in some way, most of the time it only sounds incoherent and botchy to me. But after all this too chaotic stuff, I finally made some kind of peace with "He Who Invokes Decadence", thanks to the conclusive title track. This one runs for eleven minutes, mainly in more quite ways, with some of the warmth in the melodies I missed and less of the chaos I disliked before. Why couldn’t there have been more tracks like this one? So I can’t give a definite advice to check this one out. But those of you who feel addressed should check: www.septembermurder.de, www.facebook.com/smofficial, or http://septembermurder.bandcamp.com.