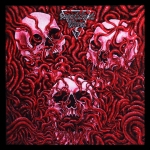 SEPULCHRAL RITES are a Chile based Death Metal band and “Death And Bloody Ritual” is their first EP released by Dunkelheit Production. SEPULCHRAL RITES play traditional Death Metal with AUTOPSY inspired vocals, MOTÖRHEAD inspired bass and Florida inspired drumming. This is a quality old school Death Metal release, the band is at ease with the delivery of the spell, the production is fantastic, the bass shines through, it gallops on the powerful layer of drumming. The band breaks into solos which are delightful and dig deep into the hollow as it ends and almost immediately the band picks up tempo to match the evil of the guitar tone. Stylistically, we’ve established what the band sounds like, the vocals are the last part which remind us of the good times of 90s Death Metal. Tracks like ‘Possession’ are an absolute standout, a machiavellian approach twisting with thick rhythm and fiesty guitars! I wouldn’t expect Death Metal from Chile to be any different and SEPULCHRAL RITES surely live up to the expectation. This is absolutely engaging Death Metal with a twist of PESTILENCE like Death / Thrash being thrown into the mix. I have to say, the strength of the band is the unforgiving rhythm that marches on demolishing anything in sight and path, it’s a delight. SEPULCHRAL RITES keep it simple, most of the EP pays spiritual tribute to “Leprosy” era sound onto which the band throw in a shroud of their dark spells making it even enjoyable. Now coming to the final part, this is an all female 3 piece band. Does that make the band interesting? Maybe. However, what we’re all here for is Death Metal which the band delivers with no compromise. SEPULCHRAL RITES have written a quality slab of Death Metal that’s pretty kick-ass from start to finish. At just under 19 minutes, this EP is worth your time for sure. Looking forward to their future releases. Category: 90s appreciation hour. For more information, please visit: www.facebook.com/sepulchral.rites, www.facebook.com/dunkelheitprod