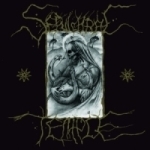 Finnish / British trio SEPULCHRAL TEMPLE are an unholy Death Metal triumvirate musically offering doomy, brain-meltingly heavy dark sounds that combine abysmal Death Metal not unlike a more epic version of classic INCANTATION with a barbaric war metallic violence and highly disturbing atmosphere due to a good sense for dynamic arrangements and the utterly demented screams (almost as shrieking as Dani Filth in his prime!) contrasting the sinister growls which dominate the vocal department. To be honest, the screams suck hard in my opinion but no one can deny these guys are able to summon one hell of a powerful aura that might pull you in due to its possessed and twisted feel. Concentrating on marching mid-tempo mostly and serpentine riffs and tiny melodies works in favour of SEPULCHRAL TEMPLE making its two, long songs ‘Salvific Dance’ and ‘Sepulchral Temple’ and short outros accessible yet brute and bestial. Topped off by a great analogue sound this is certainly a fabulous discovery for worshippers of GRAVE MIASMA, GENOCIDE SHRINES, TEITANBLOOD or whatever else verges between Death Metal darkness and War Metal ruthlessness. This reeks of slaughtered lambs, ancient tombs, rancid blood and naked dead flesh. A rough mix for your enjoyment or disgust you’ll find here. Become a disciple of the SEPULCHRAL TEMPLE by ordering this also beautifully designed MLP here: www.ironbonehead.de