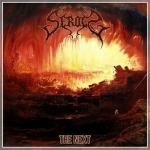 SEROCS
The Next
(Comatose Music)
31:50min

An increasing number of technical – or even über-technical and downright brutal Death Metal bands have made their invasion through the entire extreme underground Metal scene over these past years. Without starting any THAT targeted name bombardment in here, it needs to be admitted Mexican brutal tech Deathsters SEROCS have got some interesting things going on their 2nd album, shortly titled "The Next". For those people that didn’t know, the line-up of SEROCS has been built up with some current as well as ex – musicians from some known and less known extreme underground Metal acts as MONSTROSITY, LECHEROUS NOCTURNE, LEGION OF LUNACY, SOTAJUMALA, etc. – just to name a few. This nearly 32 minutes package introduces a band that not only punishes listeners eardrums by nonstop brutality and intensity of technical Death Metal blasts but also doesn’t hesitate to add a twist of progressiveness and bits of little jazzy tinged sections, into their songs. Undoubtedly – and yet so obviously even, they have done everything carefully on "The Next", following the crucially important steps of some other successful über-technical, jazzy Death Metal acts as NECROPHAGIST, DYING FETUS, DECREPIT BIRTH and whatnot, even the already defunct Finnish technical and grinding Death gods DEMILICH, well, at least from far distance when it comes to some of this disc’s certain tricky moments. SEROCS’ Death Metal is full of odd time signatures, blazing riffs, several unusual tempo changes, insane drumming (Timo Häkkinen behind the battery, is simply incredible) and Jason Hohenstein’s (ex – LECHEROUS NOCTURNE, etc.) raging, snarly death grunts. SEROCS’ unerring recipe for some high-tech, progressive Death Metal really works pretty nicely indeed, spreading like a lethal bubonic plague and taking all of us eventually, one by one. With a nice amount of guest vocal help (Antti Boman of DEMILICH, Chris Lollis of LECHEROUS NOCTURNE and so on), the disc turns out to be too tempting to not be missed – for the fans of ridiculously technical, brutal and progressive Death Metal at least. More about SEROCS can be found right from here: www.facebook.com/serocsband, label: www.comatosemusic.com