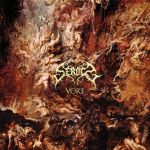 It’s rare when you find a band that’s been in such a diverse set of countries… Mexico, France and Canada. However, somehow SEROCS have managed that. In slightly over a decade, they’ve released four full-lengths, along with the new EP “Vore”. Providing us with brutal Death Metal that’ll rip your feble eardrums out, SEROCS are a kick-ass band that never really lets up throughout. ‘Dawn Of The Beholders’ begins the destruction with an immediate blast of sweltering, rapid guitars, gutteral vocals and drums that remind me a little of HOUR OF PENANCE, which is a good thing. ‘Building A Shrine Upon Vanishing Sands’ is a tech Death assault as ‘Shallow Vaults’ provides a segue into thunderous ‘The Temple Of Knowledge’, consisting of a pulsating bassline, mesmeric riffs and death-belches, that combined, remind us of why we listen to Metal in the first place. And damn, those vocals are deeeeeeeep. ‘To Self Devour’ is another tech delivery that remains brutal without getting all self-absorbed like other tech bands we know. The final two tracks, ‘Nihilus’ and ‘Anthropic’ are instrumental demos from 2011 which are much more technical than the previous tracks, indicating an evolution to heavier songwriting in their future. “Vore” is 30 minutes of delicious Death Metal that, for the first five tracks, will stomp your face into the concrete until your teeth are scattered around you. And yes, that’s a compliment. If you’re into a more modern sounding Death Metal with a little tech thrown in, SEROCS may just be right up your alley. For more info, check out www.facebook.com/serocsband, www.everlastingspew.com