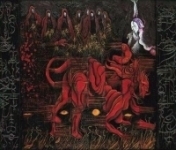 An invasion of Finnish retro Death Metal bands continues… part ‘lost-my-count-already’… SERPENT ASCENDING is a creation of Jarno Nurmi who plays all instruments and does the vocals in SERPENT ASCENDING, and who has previously earned his spurs in such bands as NERLICH, NOWEN, SLUGATHOR, NIGHT MUST FALL and DESECRESY. Having all this history with both his other current and ex-bands, I think it has helped him somewhat drastically to envision what he wanted to achieve with SERPENT ASCENDING musically – and finding the right components to build up this specific sound around his band that actually does not surprise me a bit at all. The 90s was a true heyday for the Finnish underground Death Metal with bands like DEMIGOD, CONVULSE, FUNEBRE, SENTENCED, DEMILICH, ABHORRENCE, PHLEGETHON among many others – and I think Jarno has also well realized with SERPENT ASCENDING that those golden times could be cherished even a little more, hence SERPENT ASCENDING’s existence is more than well-grounded based on Jarno’s dedication and determination to create something in the early 90s vein; something that takes things back to the basics: creepy, murky, primitive and eerie atmospheres of early Finnish Death Metal that used to set the whole underground world on fire some 20 frigging years ago. Jarno’s passion for this early sound of Finnish Death Metal is very evident when one gets to hear his works on "The Enigma Unsettled". Actually the first thing for me to notice is – even without knowing any facts about SERPENT ASCENDING, somehow how deeply ‘Finnish’ the band sounds like. I think I am not totally wrong if I have guts to state (and I have) that SERPENT ASCENDING’s sound is closer to ABHORRENCE’s / early AMORPHIS’ and early DEMIGOD’s sound than any other Finnish Death Metal acts from the early 90s period. SERPENT ASCENDING has very similar creepy and haunting melodies that were an integral part on ABHORRENCE’s and early DEMIGOD’s rehearsal / demo releases back in the day. The musical formula, that’s been squeezed into Jarno’s new band, has many of the same elements that both ABHORRENCE as well as DEMIGOD used so successfully within their grinding and eerie Death Metal in the early days of these bands’ careers – only with one exception: gladly, a modern studio technology has also provided a good, suitable sound for this record to support the songs better, without any muddy sound like many demo bands tended to have in the early 90s. The vibe and feeling of those past times are still strongly present in the production of this record, the man himself in charge obviously paying a quite amount of careful attention to not having a too sterile and overly clean sound on this release, just to maintain his primal vision how SERPENT ASCENDING should actually sound like in the first place. Therefore it’s very easy for me to say SERPENT ASCENDING’s retro-ish, old school Death Metal – with a heavy ‘done 100% the Finnish way’ stamp put all over it, surely catapults the band towards homes of old school lovers of true Finnish Death Metal sound. It happened to me – and I bet your turn will come next, undoubtedly sooner than you could ever possibly expect it even. www.myspace.com/serpentascending, www.i-voidhanger.com