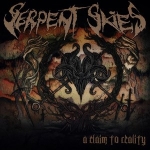 SERPENT SKIES is a relatively new band from Sweden, formed in 2012 and hailing from Gävle. As exception in the stream of many releases from this beautiful country lately the style on "A Claim To Reality" is not the Stockholm sound or old school Death Metal but in the vein of their melodic opponent from Göteborg. Melodic is the keyword in defining the debut full-length of these five lads because it takes up all atmosphere, stealing room from agression or brutality. In a track like ‘Forever Haunted’ it’s hardly Metal we’re talking about. This passive approach is not a point of criticism and it perfectly fits the rather light production and vocals of Ludvig Setterlind (ok, on ‘Sic Parvis Magna’ it’s getting too weak/soft). As comparison the late DISSECTION came to mind while listening to ‘Moments Of Truth’. Maybe DARK TRANQUILLITY, ARCH ENEMY, IN FLAMES and the likes could be named even though these bands are rower than SERPENT SKIES. Before "A Claim To Reality", the band released an EP in 2012 called "Graveyard Poets" with the four tracks ‘Graveyard Poets’, ‘To Exit And Down’, ‘Lost In Space’ and ‘Indians’ which are featured here as well. In terms of quality there’s not much wrong here and even though trodden paths are followed, almost each track is pretty solid and makes it easy to listen. So nothing to be upset about, right? I’m not sure in which degree this album will impress the regular visitors of Voices but in case you want something not too heavy for a change, these 11 tracks might come in handy. For more info, visit www.facebook.com/pages/serpent-skies/303835206396929, www.sliptrickrecords.com