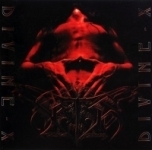 This new album by French Black Metallers SETH caught me totally by surprise at first because of the radical change of style they have chosen to follow. While their previous effort (“The Excellence”) was still deeply rooted in the Scandinavian wave of classic Black Metal, with “Divine-X” the band did a sort of quantum leap towards the avant-garde domain. Before I go further, let me reassure you that SETH still perform extreme and intense Black Metal, so don’t expect nonsensical, sterile, boring and arrogant experimentations here. Simply put, SETH bring now a touch of progressiveness to their music, very reminiscent of what ARCTURUS did with their classic first, but in an even more convincing way dare I say. “Divine-X” can certainly not be labeled as an instant album to get into, far from that, and you will have to listen to it at least three times to begin to understand its greatness. Lots of work was obviously put into the making of this album, as each detail appears carefully crafted to serve the whole concept. Musically, expect adventurous arrangements, surprising rhythm changes, a discreet use of keyboards to induce an atmosphere of strangeness and aggressive melancholy, and lot of sound effects in the vocal department. My favorite track is ‘The Sons Of Seth’ with its aerial yet sinister finale, but in the end all of songs sound equally convincing, so no bad surprise to be found here. Unfortunately I didn’t get the lyrics, but judging by the song titles, I would say that SETH give a very modern edge to occult and satanic themes. I would like to stress also the fantastic guitar leads, a rare occurrence when speaking about Black Metal. “Divine-X” is more than another Black Metal album and SETH appear now as an elite band. Just buy and enjoy!