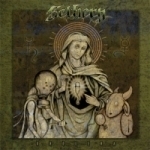 Be cursed of all my holy vultures… Finland’s 1st class hell division SETHERY took me by a somewhat big surprise as far as their debut album titled “Kholera” is concerned. I had already heard some demo songs from them earlier this year, and I was rather positively impressed by them already. But it’s the band’s debut album that has strongly been armed with a sheer blackish evil power that it’s able to blow you to thousands of pathetic pieces by one shot only. Or something like that anyway, eh? Well, without painting the horizon with even more exaggerating and sweet colors of death and decay, let’s get to the point, shall we? First off, it’s no exaggerating to say that Finland’s SETHERY could be compared to Norwegian masters of blackish arts DIMMU BORGIR by their symphonic, aggressive and even relatively thrashy Black Metal compositons. Now I have to be a bit careful here though because comparing SETHERY to DIMMU BORGIR’s latest two albums, would be damn misleading and simply wrong. But to compare KHOLERA to “Enthrone Darkness Triumphant”, we are much closer to a little bit safer black waters, I suppose. SETHERY have managed to create the same kind of vibe for their songs on “Kholera” where Metal can flow effortlessly with a strongly aggressive touch in it yet being symphonic and quite melodic at the same time as well. In my opinion this is where the unholy union of SETHERY is very good at. You are actually able to hear from everything that this Finnish 5-some may have well spent a few hours listening to DIMMU BORGIR’s breakthrough album “Enthrone…” with a couple of sharp pairs of ears while rehearsing songs for “Kholera”. It’s simply too evident to not confess this as a fact; almost taken for granted as well. It’s pretty much like they even don’t feel necessary to hide any of those DIMMU – influences anywhere, so at least I have no problem to accept them as they come forth on KHOLERA. They sound just fine to me and I feel really comfortable with the guys’ 8 strongly DIMMU – reeking tunes on this record. If one of their main purposes was to record as catchy sounding album as possible, then consider that particular mission more than well accomplished. There really isn’t much else I could say about “Kholera”. But if you owe and dig DIMMU’s “Enthrone Darkness Triumphant”, it’s very likely that you will write SETHERY’s “Kholera” down on your shopping list next. These guys know exactly how to use their main weapons a damn effectively slaughtering and murderous way, believe me! For all further info on SETHERY check out www.sethery.com. Label contact: www.woodcutrecords.com