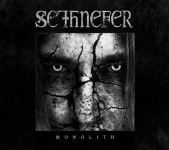 Ahhh…Death’n’Roll from Germany. The genre’s hit and miss on a regular basis. It’s also a genre that has difficulty gaining momentum in the Metal field. Of course, you have ENTOMBED. But not every band’s of ENTOMBED caliber. Not many are, actually. So I was curious to see how SETHNEFER’s new album holds up. Only three full-lengths since 2001… Sometimes the railroad derails between albums. But "Monolith" starts out strong with the opener ‘AshesIIAshes’, a bombastic full-throttle rocker full of old school riffs and hoarse vocals. ‘Black Angel’ swaggers like a pompous drunkard in hell’s bar. The third track ‘Mind Over Matter’ totters forward with a straightforward Metal anthem. By track four, ‘Soul Eater’, the album sort of levels off. There’s really nothing new here. The songs are solid. Nothing wrong, really. But midway through the album, I realize overall that it seems to lack energy. There’s nothing really in your face. Nothing to kick you in the balls and make you vomit putridity. Nothing to make you thrust your fists in the air in defiance. ‘In Honour…’ plods onward with a slowed down track of normality. And why do I hear kitchen utensils being thrown around at the beginning of ‘Everything’? This almost sounds like a love song. The riffs of ‘Dead Inside’ are a nice throwback to ’80s or 90s Metal. But the slow vocals of album-ender ‘Monolith’ put me to sleep. Overall, not a bad album. But it needs a good shot of whiskey to get the party started. For more info, check out www.facebook.com/sethnefer.official