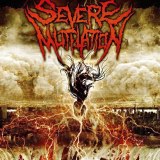 The internet is a funny thing… The whole world seemed to have moved closer together, Metal bands from countries once exotic have become the norm. First it was South America, then came Asia. Now it is the Caribbean. You want Death Metal from Puerto Rico? Here you are! SEVERE MUTILATION have just done their second album after their self-released debut "Internal Putrefaction". What do we get? Quite technical, brutal Death Metal, influenced by bands like MONSTROSITY and SUFFOCATION. But SEVERE MUTILATION are not as fiddling as the latter, thank goodness! Nine songs (plus one very short intro) in just 29 minutes prove that these guys are on a straight way to brutality. Songs like ‘Practice What Your Preach’ or the title track speak a very clear language here. But even though I gave the album several run-throughs, it didn’t really sweep me off my feet in its entirety. SEVERE MUTILATION did a fine job with "Spawn Of Hatred", unquestionably. But they sound a little too exchangeable to me. Some songs are pretty fine, like ‘All Respect For Life Is Lost’ or the mini hit ‘I Kill For God’, but in the long run there are too few remarkable moments. The a little too clean, yet brutal sound might also do contribute to these facts. In direct comparison, the songs from the first album I heard on facebook appealed more to me, thanks to their rawer sound and their more direct brutality. But if you are into brutal Death, you won’t do something wrong when you check out: www.facebook.com/severemutilation