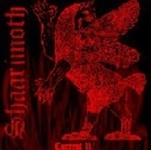 This recording was originally released by the Swedish label Carnal Records back in 2005, here I got the LP version to review which was released in February 2007 by Temple Of Darkness Records from Spain. So what forces a label to release a vinyl edition of an already two year old release? The leading force behind it should be quality and originality I suppose. SHAARIMOTH from Norway offers both and therefore I think the decision to release “Current 11” on vinyl was a decision worth to support for fans of this good old type of plastic. What do you think when reading songtitles like ‘Utukki Limnute: (Summoning Of The Seven)’, ‘In The Shadow Of Akhkharu’ or ‘Incantation Of Hubur’? The first band which came to my mind was NILE and for sure the masters MORBID ANGEL, and musically spoken there are some parts which can refer to NILE, and even bigger influence should be MORBID ANGEL. Musically not really comparable to them, still I think the atmosphere SHAARIMOTH are creating can be compared to the one created by MORBID ANGEL. The song structures are totally unique, strange, chaotic still offer a certain line which you can follow. Anyhow, this release takes your time and requests it. You might not like it with your first listen, but if you give it a try you are getting more and more bonded by the songs and this strange atmosphere. It took me a few listens to discover how awesome this release is. I’m not sure how to finish this review as this is such a weird but totally outstanding album. I can only say, I’m highly impressed and can only suggest all of you out there who are looking for something original to buy this LP and support a great band and an upcoming label with it. I’m looking forward to a new output from them, wonder how they may progress!! Get this LP for 12 € from www.templeofdarknessrecords.com.